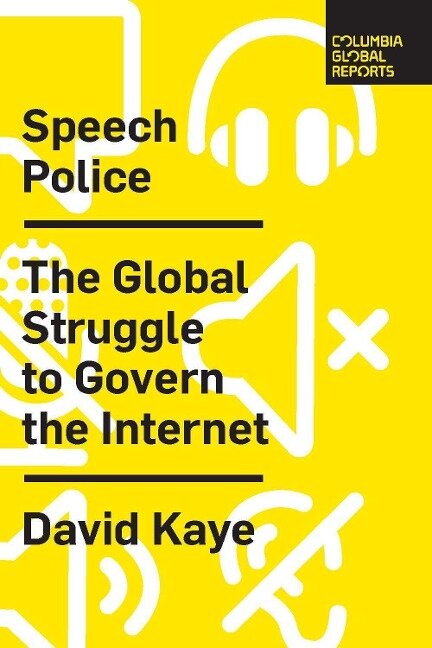 Speech Police: The Global Struggle to Govern the Internet

"David Kaye's book is crucial to understanding the tactics, rhetoric and stakes in one of the most consequential free speech debates in human history.” —Cory Doctorow, author of Radicalized, Walkaway and Little Brother
The internet was designed to be a kind of free-speech paradise, but a lot of the material on it turned out to incite violence, spread untruth, and promote hate. Over the years, three American behemoths—Facebook, YouTube and Twitter—became the way most of the world experiences the internet, and therefore the conveyors of much of its disturbing material.
What should be done about this enormous problem? Should the giant social media platforms police the content themselves, as is the norm in the U.S., or should governments and international organizations regulate the internet, as many are demanding in Europe? How do we keep from helping authoritarian regimes to censor all criticisms of themselves?
David Kaye has been has been at the center of the discussions of these issues for years. He takes us behind the scenes, from Facebook's "mini-legislative” meetings, to the European Commission's closed-door negotiations, and introduces us to journalists, activists, and content moderators whose stories bring clarity and urgency to the topic of censorship. Speech Police is the most comprehensive and insightful treatment of the subject thus far, and reminds us of the importance of maintaining the internet's original commitment to free speech, free of any company's or government's absolute control, while finding ways to modulate its worst aspects.

David Kaye is clinical professor of law and director of the International Justice Clinic at the University of California, Irvine. He is a member of the Council on Foreign Relations, and served as the United Nations Special Rapporteur on the promotion and protection of the right to freedom of opinion and expression from 2014-2020. His articles have appeared in publications such as The Washington Post, the Los Angeles Times, The New York Times, Slate, and Foreign Affairs. He lives in Los Angeles, CA.