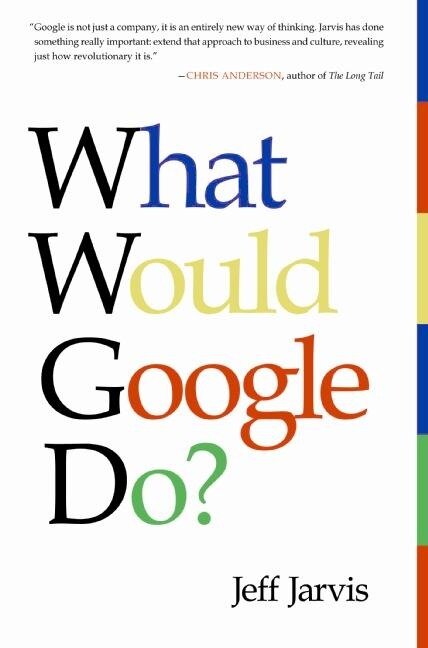 What Would Google Do?

Jeff Jarvis blogs about media and news and writes columns for The Guardian. He is an associate professor and director of the interactive journalism program at the City University of New York's new Graduate School of Journalism and consult for media companies. Until 2005, he was president and creative director of Advance.net, the online arm of Advance Publications. Prior to that, he was creator and founding editor of Entertainment Weekly; Sunday editor and associate publisher of the New York Daily News; TV critic for TV Guide and People; a columnist on the San Francisco Examiner; assistant city editor and reporter for the Chicago Tribune; and a reporter for Chicago Today.

"Google is not just a company, it is an entirely new way of thinking about understanding who we are and what we want. Jarvis has done something really important: extend that approach to business and culture, revealing just how revolutionary it is."
Chris Anderson, Author of The Long Tail Chris Anderson, author of The Long Tail
"What Would Google Do? is an exceptional book that captures the massive changes the internet is effecting in our culture, in marketing, and in advertising."
Craig Newmark, Founder of craigslist
"Jeff Jarvis has written an indispensable guide to the business logic of the networked era, because he sees the opportunities in giving the people control, and understands the risks in letting your competitors get there first."
Clay Shirky, Author of Here Comes Everybody
"Jeff Jarvis's What Would Google Do? is a divining rod for anyone looking for ways to hit real paydirt in the new territory of Web 2.0 marketing. Jarvis has a sharp eye for what is relevant, real, and actionable. Isn't that what we all need today?"
Marc Benioff, Chairman and CEO, salesforce.com
"Most of Jarvis's points - about customer influence, user-driven innovation, the death of middlemen - are by now axiomatic. And yet he manages to make the revolution feel newly revolutionary ... the book exudes credibility."
Inc.
"[Jarvis's] bold thinking and prodigious faith results in a rollicking sermon on reinvention and reinvigoration."
Miami Heraldx
"[Jarvis] is an intelligent observer of technology and the media and has intellectual scruples.... [T]here are lessons to be learnt from Google and its single-minded determination to change how business is done."
Financial Times
"Blogger/columnist Jeff Jarvis's treatise on how - and why - companies should think and act like Google brings to mind several trite words from the world of literary criticism: eye-opening, thought-provoking and enlightening."
USA Today
"Jarvis, proprietor of the influential media blog BuzzMachine, gleans maxims from Google's successful strategies that occasionally sound like doublespeak (Free is a business model! Abundance is the new scarcity! Correcting yourself enhances credibility!). But they boil down to practical suggestions."
Time magazine
"[Jarvis's] observations are worth reading....We're never going to unplug the Internet, so read this book with the long view in mind. Mr. Jarvis's rules don't all apply to you, but they're all true enough for someone"
Wall Street Journal
"For those who haven't thought much about how radically, rapidly and irreversibly the Internet has empowered us and changed our culture, "What Would Google Do?" by Jeff Jarvis will be revelatory. It is a stimulating exercise in thinking really, really big. "
San Jose Mercury News