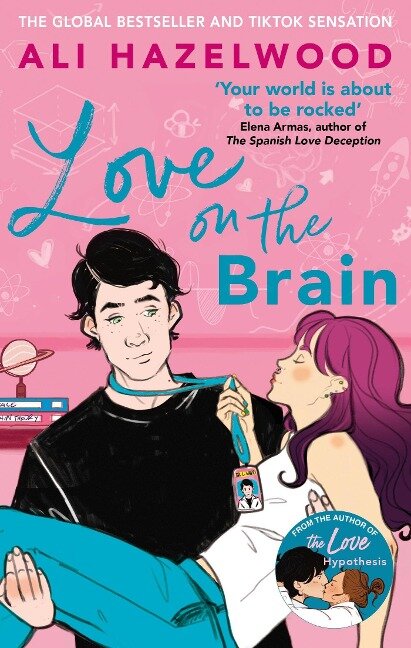 From the New York Times bestselling author of The Love Hypothesis comes a new STEMinist rom-com in which a scientist is forced to work on a project with her nemesis-with explosive results.
Like an avenging, purple-haired Jedi bringing balance to the mansplained universe, Bee Königswasser lives by a simple code: What would Marie Curie do? If NASA offered her the lead on a neuroengineering project-a literal dream come true after years scraping by on the crumbs of academia-Marie would accept without hesitation. Duh. But the mother of modern physics never had to co-lead with Levi Ward.
Sure, Levi is attractive in a tall, dark, and piercing-eyes kind of way. And sure, he caught her in his powerfully corded arms like a romance novel hero when she accidentally damseled in distress on her first day in the lab. But Levi made his feelings toward Bee very clear in grad school-archenemies work best employed in their own galaxies far, far away.
Now, her equipment is missing, the staff is ignoring her, and Bee finds her floundering career in somewhat of a pickle. Perhaps it's her occipital cortex playing tricks on her, but Bee could swear she can see Levi softening into an ally, backing her plays, seconding her ideas...devouring her with those eyes. And the possibilities have all her neurons firing. But when it comes time to actually make a move and put her heart on the line, there's only one question that matters: What will Bee Königswasser do?
What the five star reviews are saying about The Love Hypothesis:
'Did I read this in 24 hours? Yes.'
'Funny. Snarky. Intelligent. Real.'
'If you're even slightly thinking about getting this book to read, just go a head and do it'
'Adam is just *swoon*'
'Ali Hazelwood has made herself an auto-buy author'
'It was just... perfect.'
'A heroine you will instantly fall in love with'

Ali Hazelwood is the New York Times and Sunday Times bestselling author of The Love Hypothesis and Love on the Brain, as well as a writer of peer-reviewed articles about brain science, in which no one makes out and the ever after is not always happy. Originally from Italy, she lived in Germany and Japan before moving to the US to pursue a PhD in neuroscience. She recently became a professor, which absolutely terrifies her. When Ali is not at work, she can be found running, eating cake pops, or watching sci-fi movies with her two feline overlords (and her slightly-less-feline husband).