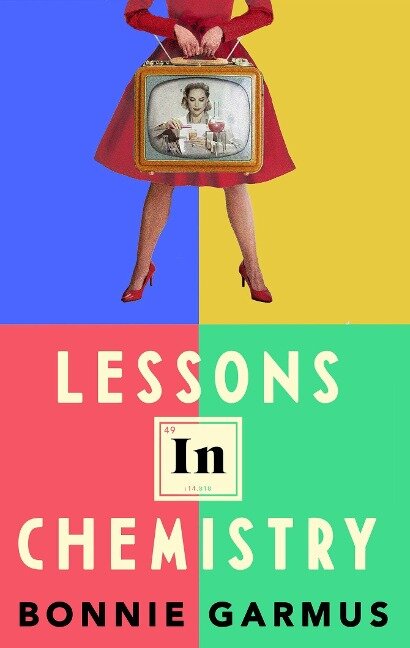 STYLIST MAGAZINE'S 'FICTION BOOKS YOU CAN'T MISS IN 2022'
OBSERVER'S 'TEN DEBUT NOVELISTS OF 2022'
SOON TO BE ON BBC2's 'BETWEEN THE COVERS' WITH SARA COX
'Sparky, rip-roaring, funny, with big-hearted fully formed, loveable characters' SUNDAY TIMES
'The most charming, life-enhancing novel I've read in ages. A perfect delight' INDIA KNIGHT
'Laugh-out-loud funny and brimming with life, generosity and courage' RACHEL JOYCE
'A novel that sparks joy with every page' ELIZABETH DAY
____________
Your ability to change everything - including yourself - starts here
Chemist Elizabeth Zott is not your average woman. In fact, Elizabeth Zott would be the first to point out that there is no such thing.
But it's the early 1960s and her all-male team at Hastings Research Institute take a very unscientific view of equality. Except for one: Calvin Evans, the lonely, brilliant, Nobel-prize nominated grudge-holder who falls in love with - of all things - her mind. True chemistry results.
Like science, life is unpredictable. Which is why a few years later, Elizabeth Zott finds herself not only a single mother, but the reluctant star of America's most beloved cooking show, Supper at Six. Elizabeth's unusual approach to cooking ('combine one tablespoon acetic acid with a pinch of sodium chloride') proves revolutionary. But as her following grows, not everyone is happy. Because as it turns out, Elizabeth Zott isn't just teaching women to cook. She's daring them to change the status quo.
__________
SOON TO BE A MAJOR APPLE TV SERIAL
'I loved Lessons in Chemistry and am devastated to have finished it!' NIGELLA LAWSON
'Elizabeth Zott is an iconic heroine - a feminist who refuses to be quashed, a mother who believes that her child is a person to behold, rather than to mould, and who will leave you, and the lens through which you see the world, quite changed' PANDORA SYKES
'It's the world versus Elizabeth Zott, and I had no trouble choosing a side. A page-turning and highly satisfying tale: zippy, zesty, and Zotty' MAGGIE SHIPSTEAD, author of GREAT CIRCLE

BONNIE GARMUS is a copywriter and creative director who has worked widely in the fields of technology, medicine and education. She is an open-water swimmer, a rower, and mother to two wonderful daughters. Born in California and most recently from Seattle, she currently lives in London with her husband and her dog, 99. Her first novel, LESSONS IN CHEMISTRY, is a No.1 Sunday Times and No. 1 New York Times bestseller. It was voted Hay Festival Book of the Year by readers, won the Goodreads Choice Award for Best Debut Novel and was shortlisted for the Waterstones Debut Fiction Prize. Translated into more than thirty-five languages, it is being adapted as an Apple TV series starring Brie Larson.