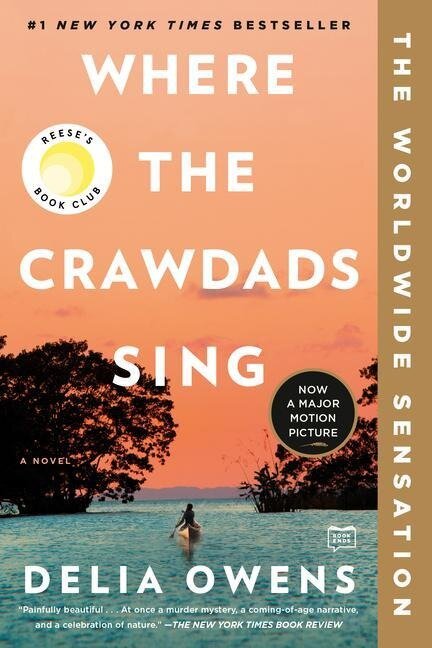 The #1 New York Times bestseller with over 7 million copies sold, "a painfully beautiful first novel that is at once a murder mystery, a coming-of-age narrative and a celebration of nature" (The New York Times Book Review), now in paperback for the first time.
For years, rumors of the "Marsh Girl" have haunted Barkley Cove, a quiet town on the North Carolina coast. So in late 1969, when handsome Chase Andrews is found dead, the locals immediately suspect Kya Clark, the so-called Marsh Girl. But Kya is not what they say. Sensitive and intelligent, she has survived for years alone in the marsh that she calls home, finding friends in the gulls and lessons in the sand. Then the time comes when she yearns to be touched and loved. When two young men from town become intrigued by her wild beauty, Kya opens herself to a new life-until the unthinkable happens.
Where the Crawdads Sing is at once an exquisite ode to the natural world, a heartbreaking coming-of-age story, and a surprising tale of possible murder. Delia Owens reminds us that we are forever shaped by the children we once were, and that we are all subject to the beautiful and violent secrets that nature keeps.
Story Locale: North Carolina

Delia Owens is the coauthor of three internationally bestselling nonfiction books about her life as a wildlife scientist in Africa. She holds a BS in Zoology from the University of Georgia and a PhD in Animal Behavior from the University of California at Davis. She has won the John Burroughs Award for Nature Writing and has been published in Nature, The African Journal of Ecology, and International Wildlife, among many others. She lives in the mountains of North Carolina. Where the Crawdads Sing is her first novel.