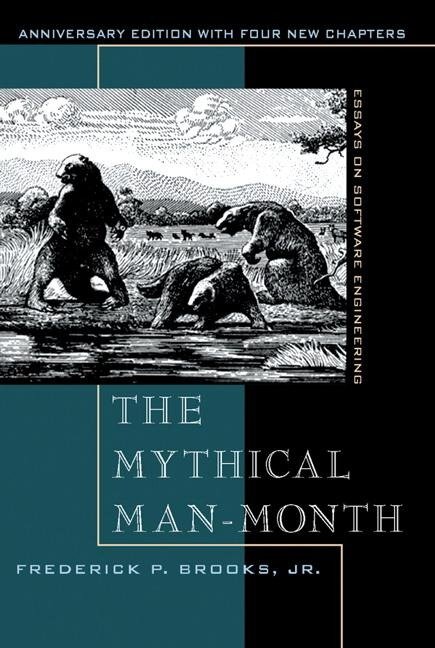 Since the first publication of The Mythical Man-Month in 1975, no software engineer's bookshelf has been complete without it. Many software engineers and computer scientists have claimed to be on their second or third copy of the book. Now, Addison-Wesley is proud to present the 20th anniversary edition-and first revised edition ever-of Fred Brooks's now legendary collection of essays on the management of computer programming projects. The 20th Anniversary edition is an updated, enhanced re-release of the Brooks classic. Included are all of the existing essays that were originally presented, with the addition of three new essays assessing the current status of software project management. Brooks's well-known 1986 article, No Silver Bullet, is also included. This 20th Anniversary edition is a major event in computer publishing.

Frederick P. Brooks, Jr., was born in 1931 in Durham, NC. He received an A.B. summa cum laude in physics from Duke and a Ph.D. in computer science from Harvard, under Howard Aiken, the inventor of the early Harvard computers.
At Chapel Hill, Dr. Brooks founded the Department of Computer Science and chaired it from 1964 through 1984. He has served on the National Science Board and the Defense Science Board. His current teaching and research is in computer architecture, molecular graphics, and virtual environments.
He joined IBM, working in Poughkeepsie and Yorktown, NY, 1956-1965. He is best known as the "father of the IBM System/360", having served as project manager for its development and later as manager of the Operating System/360 software project during its design phase. For this work he, Bob Evans, and Erick Block were awarded and received a National Medal of Technology in 1985.
Dr. Brooks and Dura Sweeney in 1957 patented a Stretch interrupt system for the IBM Stretch computer that introduced most features of today's interrupt systems. He coined the term computer architecture . His System/360 team first achieved strict compatibility, upward and downward, in a computer family. His early concern for word processing led to his selection of the 8-bit byte and the lowercase alphabet for the System/360, engineering of many new 8-bit input/output devices, and providing a character-string datatype in PL/I.
In 1964 he founded the Computer Science Department at the University of North Carolina at Chapel Hill and chaired it for 20 years. Currently, he is Kenan Professor of Computer Science. His principal research is in real-time, three-dimensional, computer graphics-"virtual reality." His research has helped biochemists solve the structure of complex molecules and enabled architects to "walk through" buildings still being designed. He is pioneering the use of force display to supplement visual graphics.
Brooks distilled the successes and failures of the development of Operating System/360 in The Mythical Man-Month: Essays in Software Engineering, (1975). He further examined software engineering in his well-known 1986 paper, "No Silver Bullet." He is just completing a two-volume research monograph, Computer Architecture, with Professor Gerrit Blaauw. Now, 20 years after the initial publication of his book, Brooks has revisited his original ideas and added new thoughts and advice within The Mythical Man-Month, Anniversary Edition.
Brooks has served on the National Science Board and the Defense Science Board. He is a member of the National Academy of Engineering and the American Academy of Arts and Sciences. He has received the the IEEE John von Neumann Medal, the IEEE Computer Society's McDowell and Computer Pioneer Awards, the ACM Allen Newell and Distinguished Service Awards, the AFIPS Harry Goode Award, and an honorary Doctor of Technical Science from ETH-Zürich.