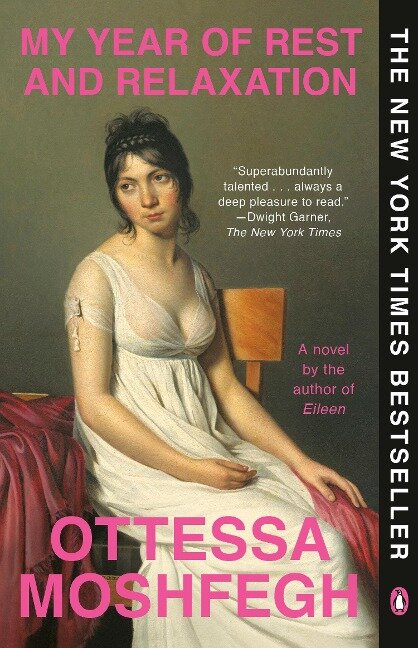 My Year of Rest and Relaxation

Entertainment Weekly's #1 Book of 2018
"One of the most compelling protagonists modern fiction has offered in years: a loopy, quietly furious pillhead whose Ambien ramblings and Xanaxed b*tcheries somehow wend their way through sad and funny and strange toward something genuinely profound."
- Entertainment Weekly
From one of our boldest, most celebrated new literary voices, a novel about a young woman's efforts to duck the ills of the world by embarking on an extended hibernation with the help of one of the worst psychiatrists in the annals of literature and the battery of medicines she prescribes.
Our narrator should be happy, shouldn't she? She's young, thin, pretty, a recent Columbia graduate, works an easy job at a hip art gallery, lives in an apartment on the Upper East Side of Manhattan paid for, like the rest of her needs, by her inheritance. But there is a dark and vacuous hole in her heart, and it isn't just the loss of her parents, or the way her Wall Street boyfriend treats her, or her sadomasochistic relationship with her best friend, Reva. It's the year 2000 in a city aglitter with wealth and possibility; what could be so terribly wrong?
My Year of Rest and Relaxation is a powerful answer to that question. Through the story of a year spent under the influence of a truly mad combination of drugs designed to heal our heroine from her alienation from this world, Moshfegh shows us how reasonable, even necessary, alienation can be. Both tender and blackly funny, merciless and compassionate, it is a showcase for the gifts of one of our major writers working at the height of her powers.
Named a Best Book of the Year by:
The Washington Post, Time, NPR, Amazon,Vice, Bustle, The New York Times, The Guardian, Kirkus Reviews, Entertainment Weekly, The AV Club, & Audible

Ottessa Moshfegh is a fiction writer from New England. Her first book, McGlue, a novella, won the Fence Modern Prize in Prose and the Believer Book Award. She is also the author of the short story collection Homesick for Another World. Her stories have been published in The Paris Review, The New Yorker, and Granta, and have earned her a Pushcart Prize, an O. Henry Award, the Plimpton Discovery Prize, and a grant from the National Endowment for the Arts. Eileen, her first novel, was shortlisted for the National Book Critics Circle Award and the Man Booker Prize, and won the PEN/Hemingway Award for debut fiction; My Year of Rest and Relaxation, her second novel, was a New York Times bestseller.